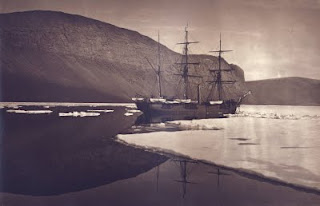 Usually, 19th century books were illustrated with steel engravings, woodcuts, photo-lithographic illustrations, or lithographs. One of the most important books on exploration in the arctic in the late 19th century is the work by George Nares.

We are offering for sale a near fine copy of one of the three books to use actual photographs for illustrative purposes.

The other two arctic books that used actual photographs were:

William Bradford. The Arctic regions illustrated with photographs taken on an art expedition to Greenland. London, 1873.