Pharsalia by Lucan in a 1760 edition by Strawberry Hill Press 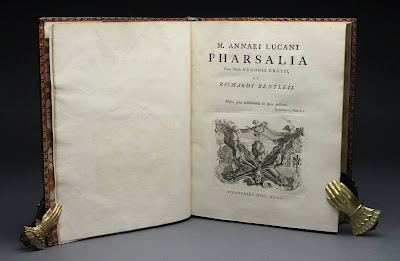 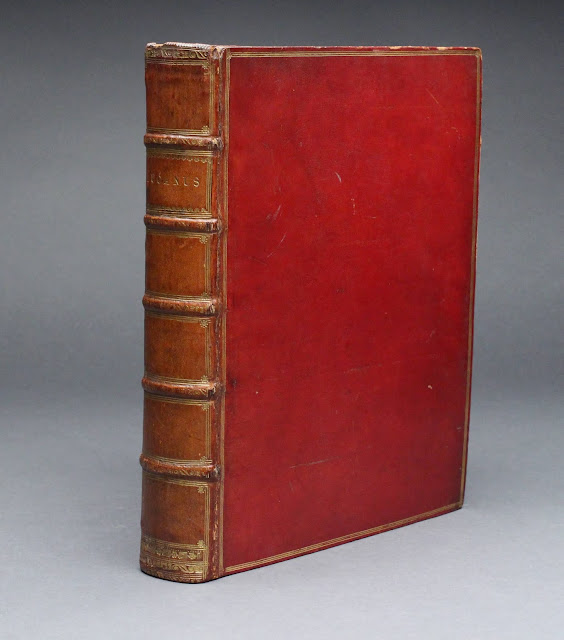 Through poetic narrative and fantasy, Marcus Annaeus Lucanus [better known as Lucan] describes what led up to the civil war between Julius Caesar and Pompey the Great and subsequent events including, and ending with (Book 10) Caesar’s arrival in Egypt, where he meets Cleopatra, followed by subsequent attempts on Caesar’s life. The title of the poem takes its name from the Battle of Pharsalus in 48 BC where Caesar defeated Pompey the Great.  “I sing of a worse than civil war, of war fought between kinsmen  over Pharsalia’s plains, of wickedness deemed justice; of how a powerful people turned their own right hands against themselves; of strife within families…” A.S. Kline translation.

Horace Walpole founded Strawberry Hill Press in 1757. As one the early English private presses, so careful and innovative in typography and layout, contemporary with John Baskerville, Walpole’s Strawberry Press would produce numerous books and pamphlets including:  A Catalogue of the Royal and Noble Authors of England…. An Account of Russia as it Was in the Year 1710 by Charles Lord Whitworth.  With the help of his friend Richard Bentley whose own father had notes for the first seven books, after some delay, Walpole produced a Quarto of Lucan’s Pharsalia, of which five hundred copies were made.  Walpole was pleased with the book and described it as “handsome.”  Havens declares that Pharsalia is perhaps the most distinguished piece of printing to come from the press at Strawberry Hill.  [Havens.  Horace Walpole and the Strawberry Hill Press, 1757-1789.]
As stated in the title, emendations have been taken from Hugo Grotius (who produced his own classical text of Pharsalia in Leiden in 1614) with numerous notes and references supplied by Richard Bentley.

Each line of poetry is organized by numbering, with numbers skipping every fifth (635, 640, 645, and so on). The poetic text sometimes takes up nearly the full page, followed by some pages where the notes (all two columns per page) dominate the page.

This edition and Strawberry Hill printing of PHARSALIA, the only classical author printed at Strawberry Hill, seems intended to offer the reader and collector the pleasure of something beautiful to hold and read, while at the same time providing a scholarly text, with useful annotations.  While the binding is not elaborate nor luxurious, it’s craftsmanship is simple and elegant.

See BOOKBINDING IN THE BRITISH ISLES, SIXTEENTH TO THE TWENTIETH CENTURY, CATALOGUE 1212. Part 1, Maggs Bros., 1996 which lists Walpole’s own copy of the book, bound in vellum.