"TO THE GREAT ARCTIC NAVIGATOR AND HIS BRAVE COMPANIONS
WHO SACRIFICED THEIR LIVES IN COMPLETING THE DISCOVERY OF THE NORTHWEST PASSAGE, A.D. 1847-8." 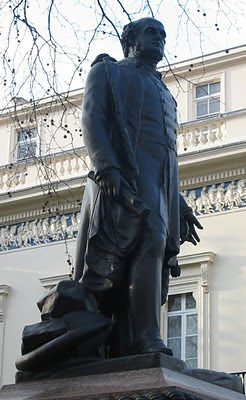 A Useful map for getting there on foot

Another polar-associated statue can been seen there as well: Antarctic Explorer Robert Falcon Scott.

I am always interested in purchasing rare books as well as photographs related to Polar Exploration.